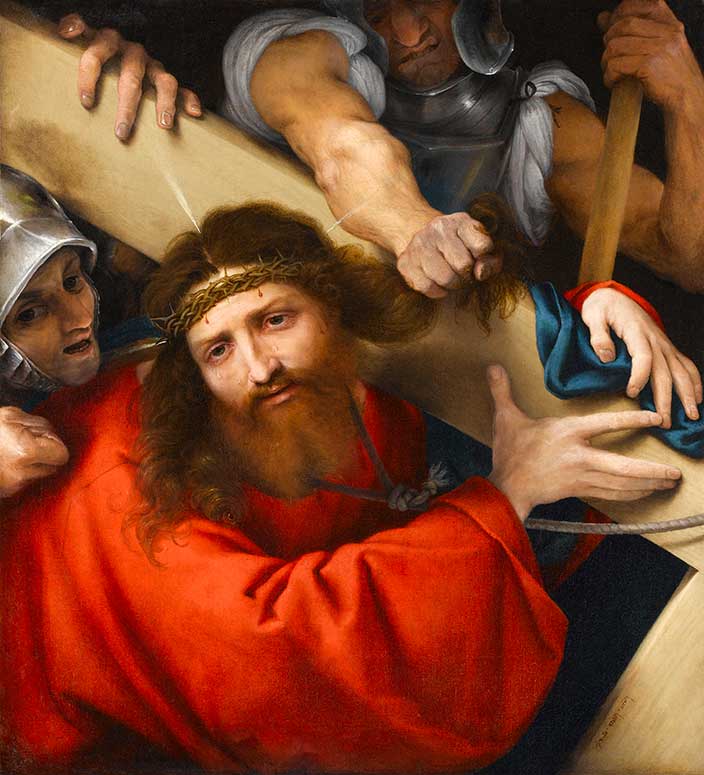 Yes, Venice is scarlet, or better, Venice is the scarlet. The history, fortunes and wealth of the city and its dominion were dyed in red for a long time. An object of personal desire and distinction, of privileges and prohibitions, the colour red in Venice was at the centre of trading activities, political manoeuvres, and even geographic enterprises, but it was also a precious stuff of art, a secret science, jealously kept, preserved and pursued by painters, dyers, alchemists and inventors, who in Venice were often one and the same.
The six works gathered for the exhibition organized by the Gallerie Nazionali in Palazzo Barberini – together and yet each one in its exceptional singularity – embody the different ways in which the “sense of red” of the venetian painters weaves a thick visual and symbolic web, intertwining civic values, religious passions, mundane feelings, private devotions, professional pride.
The paintings of Lotto, Savoldo and Cariani – from the Metropolitan Museum of New York, the Louvre, the Prado and the Accademia Carrara of Bergamo – hang in a subtle balance and in a dialogue between centre and periphery, Venice of “terraferma” and Venice “da mar”, but exhibit, perhaps just for that very reason, a surprising originality. In their canvases the stuff of painting transmutes in painting of the stuff, acquiring its variable texture, its changing shades, its multiple meanings. Such a sensual tonality fuses together, and sometimes confuses, different traditional genres, the portrait, the biblical story, the devotional painting, the biographical celebration.
In conclusion, six magnificent “studies in scarlet”, we can only unravel, isolate and expose inch by inch, as Sherlock Holmes himself would have said.