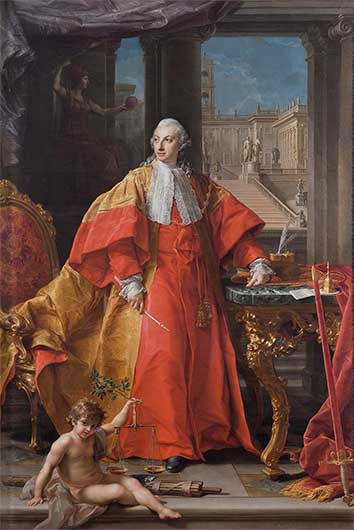 The painter and the great lord
Batoni, the Rezzonico family and occasional portraiture

Prince Abbondio Rezzonico returns to Rome. In 2016 the Italian state acquired from the heirs of the Rezzonico family the striking portrait of the Senator of Rome, painted by Pompeo Batoni in 1766 on the occasion of his triumphal entry to Palazzo Senatorio on the Capitol.
Abbondio Rezzonico (1742-1810), a member of a noble Venetian family and nephew of Pope Clement XIII, was appointed in 1765 to the rank of Senator – one of the most important magistracies in the city’s government. The great portrait commissioned from Pompeo Batoni (1708-1787) was intended to celebrate this solemn occasion.
The canvas by Batoni will be displayed together with a small group of other works illustrating the social context of the painting as well as the artist’s output. Visitors will be able to compare the two portraits of Pope Clement XIII Rezzonico, one by Batoni and the other splendidly painted by his talented rival, Anton Raphael Mengs. The latter work is on loan from the Pinacoteca Nazionale of Bologna.
Together with these two portraits there will be other works from the National Gallery’s collection of eighteenth-century paintings, not always on display. They include the elegant portraits of Count Soderini and Sir Henry Peirse by Batoni, and the exceptional portrait of the Governor Robert Clive by Anton von Maron.